Nishan Sahib is the name for the triangular Sikh flag which marks all gurdwaras and other religious premises of the Sikhs.

Nishan is a Persian word with multiple meanings, one of these being a flag or standard. Sahib, an Arabic word with the applied meaning of lord or master, is here used as an honorific.

Thus Nishan Sahib in the Sikh tradition means the “holy flag” or “exalted ensign” – a symbol representing the values of the Sikh faith. 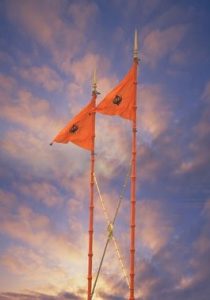 The Nishan sahib is shown respect by the Sikhs as it symbolises the inherent values of the Sikh faith – One God, equality of all humans, love & respect of all, life of service and dedication, etc.

A synonymous term is Jhanda Sahib. (jhanda also meaning a flag or banner) – but this is hardly ever used as this generally represents a national identity.

The Sikh pennant, made out of saffron-coloured, occasionally out of blue-coloured, mainly in the case of Nihangs, cloth is triangular in shape, normally each of the two equal sides being double of the shorter one.

The pennant is stitched to the mast sheath at the top which is also of the same cloth.

On the flag is commonly printed or embroidered the Sikh emblem, comprising a khanda (two-edged sword) and chakra (an edged circular weapon, a disc or quoit) and two kirpans which cross each other at the handles, with the blades flanking the chakra.

Sometimes the flag may include the inscription Ik Onkar, a term in the Mool Mantar signifying the Supreme Reality.

The flagstaff is toped by a steel khanda. No size is laid down for the Nishan Sahib. The two flags standing adjacent to each other between the Harimandar and the Akal Takhat at Amritsar are approximately 40 metres high.

The Nishan Sahib is hoisted either in the compound of a gurdwara or on the top of the building itself. Sometimes there are two flags in a gurdwara, one in the premises and the other atop the edifice.

In the centre of the insignia is the khanda the two-edged sword which symbolises the Creative Power of God which controls the destiny of the whole universe. 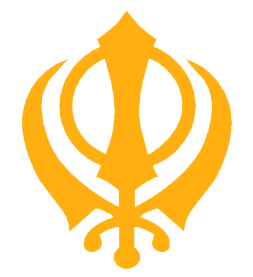 It is the Sovereign Power over life and death. One edge of the Sword symbolises divine justice, which chastises and punishes the wicked oppressors; the other edge symbolises Freedom, and Authority governed by moral and spiritual values.

On the outside of the two-edged sword, we can see two swords, which represent Miri Piri:

There must always be a balance between the two, and this balance is emphasised by a circle inside.

This circle, called a Chakra, is a symbol of all embracing Divine Manifestation, including everything and wanting nothing, without beginning or end, neither first nor last, timeless, Absolute.

It is the symbol of oneness, of Unicity of Justice, Humanity and Immortality.

Also a deadly weapon Chakras were used by almost all Sikh warriors it in the eighteenth century. Many paintings of Sikh warriors, even those of Guru Gobind Singh include depictions of Chakras stored in their turbans as still done by the Nihangs of today.

The Chakra / Chakkar, which was worn by the great martyr Baba Deep Singh is still preserved in the sanctum sanctorium of the Akal Takht. On it is incribed the Mool Mantar and that is what it symbolises.

Outside of gurdwaras, the Nishan Sahib is seen carried at the head of Sikh processions. In such public marches which generally take place on religious occasions, five Sikhs, designated as Panj Piare, carry one each of the five Nishan Sahibs in front of the palanquin in which the holy Guru Granth Sahib is seated.

Sikh public congregations as often as not open with the flag-hoisting ceremony at which Nishan Sahib is unfurled by an eminent member of the Panth.

Earlier in the time of Guru Gobind Singh and during the eighteenth century, the Sikh armies, when on the march or in the battlefield, had the Sikh standard carried in front by nishanchis (standard-bearers). 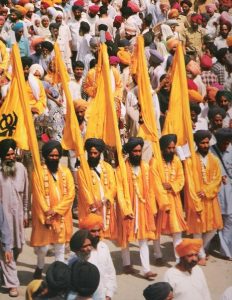 One of the Sikh misls, which in addition to being a fighting formation in its own right, perhaps provided nishanchis to other misls, was for this reason named Nishananvali misl.

In their ardas, routine supplicatory prayer, Sikhs daily, and in fact every time they pray individually or collectively, recall nishanan dhaman di kamai, the grandeur of their flags and holy places, and supplicate: chaukian, jhande, bunge jugo jug atal (may our choirs, standards and citadels flourish forever).

The origin of the Nishan Sahib is traced to the time of Guru Hargobind, who hoisted a flag over the Akal Takhat (or Akal Bunga) at Amritsar, as it was erected in 1606.

The flag, the first of its kind in Sikh tradition, was called Akal Dhuja (the immortal flag) or Satguru ka Nishan (standard of the true Guru).

The flag on the top of the Harimandar was first installed by Sardar Jhanda Singh of the Bhangi clan in 1771.

In 1783, Udasi Mahants Santokh Das and Pritam Das brought from Dera Ram Rai (Dehra Dun), a tall sal tree in an one piece, using it as the flagpost and raised the Nishan Sahib in front of a bunga (a hospice or resting place) next to the Akal Takhat whence this bunga acquired the name, Jhanda Bunga.

In 1820 Sardar Desa Singh Majithia whom Maharaja Ranjit Singh had entrusted with the management of Darbar Sahib replaced the wooden flagpost with a steel one covered with gilded copper sheets.

Later a similar flagpost was also presented by the Maharaja himself but this was not erected till 1841 when the one installed by the Majithia sardar was damaged in a storm.

Then the damaged flagpost was also got repaired and erected by Desa Singh’s son Lahina Singh Majithia and two Nishan Sahibs of equal height have been flying in front of Jhanda Bunga since then.

Both these flag posts were of solid iron.

After it had been decided to widen the parikrama (circumambulatory terrace around the sarover), the two Nishan Sahibs were pulled out and refixed a few metres away from the former site in 1923.

In 1962 the Shiromani Gurdwara Parbandhak Committee replaced them with new ones of steel pipes similarly sheathed with gilded copper sheets so that electric cables leading to the lights on top could pass through them.