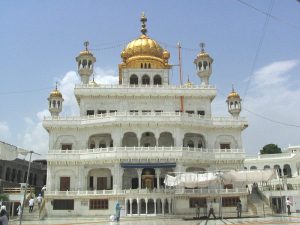 Akal Takht Sahib (ਅਕਾਲ ਤਖ਼ਤ), meaning throne of the timeless one, is one of five takhts (seats of power) of the Sikhs. It is located in the Harmandir Sahib (Golden Temple) complex in Amritsar, Punjab.

The Akal Takht was built by Guru Hargobind as a place of justice and consideration of temporal issues; the highest seat of earthly authority of the Khalsa (the collective body of the Sikhs) and the place of the Jathedar, the highest spokesman of the Sikhs.

Originally known as Akal Bunga, the building directly opposite the Harmandir Sahib was founded by sixth Sikh Guru, Guru Hargobind, as a symbol of political sovereignty and where spiritual and temporal concerns of the Sikh people could be addressed. Along with Baba Buddha and Bhai Gurdas, the sixth Sikh Guru built a 9-foot high concrete slab.

When Guru Hargobind revealed the platform on 15 June 1606, he put on two swords: one indicated his spiritual authority (Piri) and the other, his temporal authority (Miri).

In the 18th century, Ahmed Shah Abdali and Massa Rangar led a series of attacks on the Akal Takht and Harmandir Sahib. Takhat which is on the first floor was rebuilt in bricks. Between 1770-1780, under Sultan Al Quam Jassa Singh Ahluwalia 1718-1783 the leader of the Sikh Confederices in Punjab.

Hari Singh Nalwa, a general of Ranjit Singh, the maharaja, decorated the Akhal Takht with gold. On 4 June 1984, the Akal Takht was damaged when the Indian Army stormed Harmandir Sahib during Operation Blue Star.

The Akal Takht was built on a site where there existed only a high mound of earth across a wide-open space. It was a place where Guru Hargobind played as a child. The original Takht was a simple platform, 3.5 meters (11 ft) high, on which Guru Hargobind would sit in court to receive petitions and administer justice.

He was surrounded by insignia of royalty such as the parasol and the flywhisk. Later, there was an open-air semi-circular structure built on marble pillars and a gilded interior section. There were also painted wall panels depicting Europeans.

The modern building is a five-story structure with marble inlay and a gold-leafed dome. Three of the stories were added by Ranjit Singh in the 1700s. Contemporary restoration work found a layer of paint decorated lime plaster that might have been part of the original structure but later than the time of Harminder. 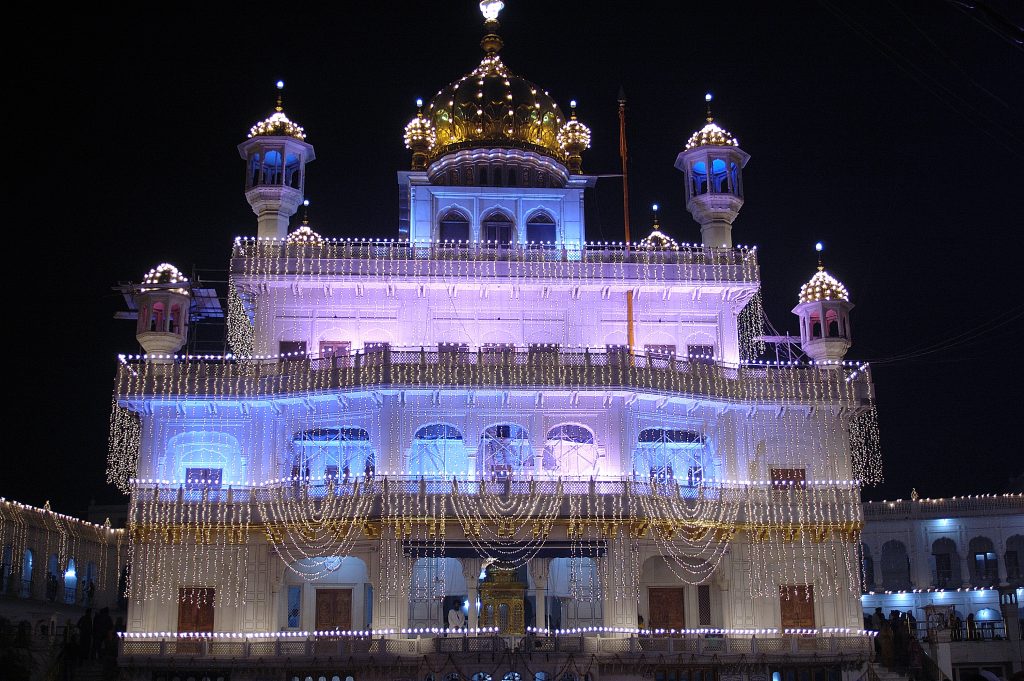 Between 3 June and 8 June 1984, the Indian army conducted an operation, ordered by Prime Minister Indira Gandhi in order to establish control over the Harmandir Sahib Complex in Amritsar, Punjab, and remove Sant Jarnail Singh Bhindranwale, the Jathedar of the Akal Takht and his followers from the complex buildings. In the fighting with the Militants led by Bhindranwale, it was damaged.

How to Reach Akal Takht Sahib: