Langar (ਲੰਗਰ), sometimes also called Mahaparasada, is the term used in Sikhism for the community kitchen in a Gurdwara where a free meal is served to all the visitors, without distinction of religion, caste, gender, economic status or ethnicity.

The free meal is always vegetarian. People sit on the floor and eat together, and the kitchen is maintained and serviced by Sikh community volunteers.

At the langar, all people eat a vegetarian meal as equals. The exception to vegetarian langar is when Nihang Sikhs (such as those at the Chhauni of Akali Phula Singh) serve meat (called mahaprasad) on special occasions.

Langar, in its earliest form, was first started in ancient India, where a form of it was practised by some Hindus. Hospitals and certain temples distributed free meals at limited times; this was witnessed by a Buddhist monk, and it was later practised by certain Buddhist temples.

Baba Farid, a Muslim of the Chishti Sufi order, was also said to practice a form of langar, when visitors came to visit his sufi Darbar. A form of langar was already popular in the 12th and 13th centuries among Sufis (Muslim mystics) and Hindus of the Indian subcontinent.

The practice grew and is documented in the Jawahir al-Faridi, compiled in 1623 CE.

According to Arvind-Pal Singh Mandair, a professor of Sikh Studies, forms of community kitchens were already operating in Punjab when Guru Nanak founded Sikhism, and these were run by Muslim Sufi orders and by Hindu Gorakhnath orders.

The khanqas of the Chisti and other Sufi saints had langar open to visitors, though Hindus and others did not attend them. 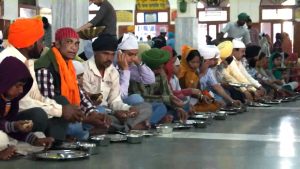 The issue with the Hindu and Sufi Muslim forms of langar was that there was a certain division, as Hindus would go to Mandars and Muslims would go to Sufi mosques, where, often, different religions and castes would not mix or eat with each other.

The Sikhs created the Sikh langar, by making it an institution for all regardless of background and making it available 24 hours a day to all.

The Sikh langar concept was an innovative charity and symbol of equality created by the founder of Sikhism, Guru Nanak, around 1500 CE; its aim was to bring those of all backgrounds, regardless of religion, caste, or creed, together, which was quite different from the Hindu, Buddhist and Sufi forms, in which food was given only to worshippers.

Guru Nanak started the Sikh langar when, as a young boy, he came across people from different backgrounds who were in need of food. In an act of grace and charity, he spent all of the money his father had given to him to start a business.

He described it as sucha sauda (the truest and highest of all businesses) to bring all people together.

In Sikhism, the practice of the langar, or free kitchen, is believed to have been started by the first Sikh Guru, Guru Nanak. It was designed to uphold the principle of equality among all people, regardless of religion, caste, colour, creed, age, gender or social status.

The second Guru of Sikhism, Guru Angad, is remembered in Sikh tradition for systematizing the institution of langar in all Sikh temple premises, where visitors from near and far could get a free simple meal in a communal seating.

He also set rules and training method for volunteers (sevadars) who operated the kitchen, placing emphasis on treating it as a place of rest and refuge, and being always polite and hospitable to all visitors.

It was the third Guru, Amar Das, who established langar as a prominent institution, and required people to dine together irrespective of their caste and social rank. He encouraged the practice of langar, and made all those who visited him attend langar before they could speak to him.

He was originally a Vaishnavite (and thus vegetarian), and is said to have accompanied Guru Angad to a langar that served meat.

When Guru Angad saw that Amar Das was nervous and sat aloof, he ordered the server to give Amar Das only cereals. Most Sikh langars serve vegetarian food, though the nihangs of Anandpur Sahib do serve meat on special occasions.