In Sikhism, the Five K of Sikh (ਪੰਜ ਕਕਾਰ) are five items that Guru Gobind Singh commanded Khalsa Sikhs to wear at all times in 1699.

The Five K of Sikh – Panj Kakar are not just symbols, but articles of faith that collectively form the external identity and the Khalsa devotee’s commitment to the Sikh rehni  “Sikh way of life”.

A Sikh who has taken Amrit and keeps all five Ks are known as Khalsa or Amritdhari Sikh, while a Sikh who has not taken Amrit but follows the teachings of the Sri Guru Granth Sahib is called a Sahajdhari Sikh. 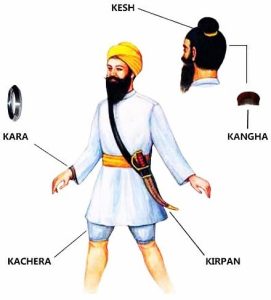 The Kesh, or uncut, long hair, is considered by Sikhs as an indispensable part of the human body. Long known as a sign of spiritual devotion, it also emulates the appearance of Guru Gobind Singh and is one of the primary signs by which a Sikh can be clearly and quickly identified.

A Sikh never cuts or trims any hair as a symbol of respect for the perfection of God’s creation. The uncut long hair and the beard, in the case of men, form the main kakār for Sikhs.

The turban is a spiritual crown, which is a constant reminder to the Sikh that they are sitting on the throne of consciousness and is committed to living according to Sikh principles. Guru Gobind Singh told his Sikhs:

A noted figure in Sikh history is Bhai Taru Singh, who was martyred when he refused to get his Kesh cut.

Comb the hair twice a day, covering it with turban that is to be tied from fresh.

A Kangha is a small wooden comb that Sikhs use twice a day. It is supposed to be worn only in the hair and at all times. Combs help to clean and remove tangles from the hair, and is a symbol of cleanliness. Combing their hair reminds Sikhs that their lives should be tidy and organized.

The comb keeps the hair tidy, a symbol of not just accepting what God has given, but also an injunction to maintain it with grace. The Guru Granth Sahib said hair should be allowed to grow naturally; this excludes any shaving for both men and women.

In the Guru’s time, some holy men let their hair become tangled and dirty. The Guru said that this was not right; that hair should be allowed to grow but it should be kept clean and combed at least twice a day.

The Sikhs were commanded by Guru Gobind Singh at the Baisakhi Amrit Sanchar in 1699 to wear an iron bracelet called a Kara at all times. The Kara is a constant reminder to always remember that whatever a person does with their hands has to be in keeping with the advice given by the Guru.

The Kara is an iron/steel circle to symbolise God as never ending. It is a symbol of permanent bonding to the community, of being a link in the chain of Khalsa Sikhs.

The Kachera is a shalwar-undergarment with a tie-knot worn by baptized Sikhs. Originally, the Kachera was made part of the five Ks as a symbol of a Sikh soldier’s willingness to be ready at a moment’s notice for battle or for defence. The confirmed Sikh (one who has taken the Amrit) wears a Kachera every day. Some go to the extent of wearing a Kacheraye while bathing, to be ready to at a moment’s notice, changing into the new one a single leg at a time, so as to have no moment where they are unprepared.

Further, this garment allowed the Sikh soldier to operate in combat freely and without any hindrance or restriction, because it was easy to fabricate, maintain, wash and carry compared to other traditional under-garments of that era, like the dhoti. The Kachera symbolizes self-respect, and always reminds the wearer of mental control over lust, one of the Five Evils in Sikh philosophy.

Kachera follows a generally practical and roomy design. It features an embedded string that circles the waist which can be tightened or loosened as desired, and then knotted securely. The Kachera can be classed between underwear and an outer garment, as in appearance it does not reveal private anatomy, and looks and wears like shorts.

As with all of the Five K of Sikh – Panj Kakar, there is equality between men and women, and so women are also expected to wear it. Considering the hot climate in India, the Kachera is often worn by men as an outer garment, keeping the wearer cool and being practical in manual work such as farming, but it is generally not considered respectful for women to wear the Kachera as an outer garment (on its own) as it is considered too revealing.

The Kirpan is a dagger that symbolizes a Sikh’s duty to come to the defense of those in peril. All Sikhs should wear kirpan on their body at all times as a defensive side-arm, just as a police officer is expected to wear a side-arm when on duty. Its use is only allowed in the act of self-defense and the protection of others. It stands for bravery and protecting the weak and innocent.

The kirpan is kept sharp and is actually used to defend others, such as those who are oppressed by harsh rulers, women who are raped in the streets, or a person who was being robbed or beaten. The true Sikh cannot turn a blind eye to such evils, thinking that they are “someone else’s concern.”

It is the duty of the true Sikh to help those who suffer unjustly, by whatever means available, whether that means alerting the police, summoning help, or literally defending those who cannot defend themselves, even if that means putting oneself in harm’s way.