Turban (Dastar) – Gift of the Guru

The turban of a Sikh is a gift given on Baisakhi Day of 1699 by the Tenth Master, Guru Gobind Singh. After giving Amrit to the Five Beloved Ones, he gave us bana, the distinctive dress that includes the turban. It is helpful to understand the historical context of his action.

During Guru Gobind Singh’s time, the turban, or “dastar,” as it is called in Persian, carried a totally different connotation from that of a hat in Europe. The turban represented respectability and was a sign of nobility. At that time, a Mughal aristocrat or a Hindu Rajput could be distinguished by his turban. 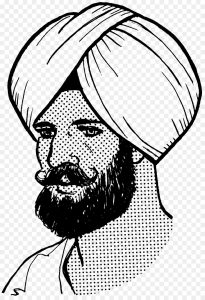 The Hindu Rajputs were the only Hindus allowed to wear ornate turbans, carry weapons and have their mustache and beard. Also at this time, only the Rajputs could have Singh (“lion”) or Kaur (“princess”) as their second name. Even the Gurus did not have Singh as part of their name, until the Tenth Guru.

The downtrodden followers of the Sikh faith did not have the means to display aristocratic attire, nor were they allowed to, even if they had the means. (Doing so was usually equivalent to a death sentence.)

It was in this context that Guru Gobind Singh decided to turn the tables on the ruling aristocracy by commanding every Sikh to carry a sword, take up the name Singh or Kaur, and have kesh (hair) and turban displayed boldly, without any fear. This effectively made his followers see themselves on a par with the Mughal rulers.

When we are in the presence of the Guru, Guru is giving us the gift of his energy. That energy is sacred and when we retain it, Guru’s energy lives in us and that gives us the living experience of Guru. To help retain that energy we cover our heads with a turban.

Turbans go way back in history as part of a spiritual practice. The top of your head is the tenth gate or the crown chakra. It is normally covered by hair that acts as antennae to protect the top of the head from sun and exposure, as well as to channel sun and vitamin D energy.

Yogis or Sikhs do not cut their hair, they coil or knot it on top of head on their solar center. In men the solar center is on top of the head at the front (anterior fontanel).

Women have two solar centers: one is at the center of the crown chakra, the other is on top of the head towards the back (posterior fontanel).

For all, coiling or knotting the hair at the solar centers channels one’s radiant energy and helps retain a spiritual focus.

This hair knot is traditionally called the “rishi” knot. In ancient times, a rishi was someone who had the capacity to control the flow of energy and prana in the body.

A “maharishi” was someone who could regulate the flow of energy in the body, meditatively and at will. 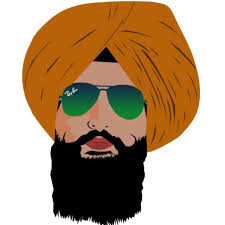 The rishi knot assists in the channeling of energy in meditation (Naam Simran). If one cuts off the hair, there can be no rishi knot.

By giving us the rishi knot and the turban the Guru gave us the blessing to have the capacity of a rishi.

The 10th Sikh Master, Guru Gobind Singh, taught his Sikhs to take the next step: Put a turban on the head covering the coiled, uncut hair.

The pressure of the multiple wraps keeps the 26 bones of the skull in place.

There are pressure points on the forehead that keep you calm and relaxed. Turbans cover the temples, which protects you from mental or psychic negativity of other people.

The pressure of the turban also changes the pattern of blood flow to the brain. (These are all reasons that women should also wear turbans.)

When you tie up your hair and wrap the turban around it, all the parts of your skull are pulled together and supported. You feel clarity and readiness for the day and for what may come to you from the Unknown.

God is the Unknown. He is mastery as well as mystery. Living with an awareness of your God within you and the God outside of you (God in all) is an attitude.

Covering your head is an action with the attitude that there is something greater than you know.

Your willingness to stand under that greatness of God is expressed by taking the highest, most visible part of you and declaring it as a place that belongs to the Creator.

Covering your head is also a declaration of humility, of your surrender to God.

For many, hair is also sexually attractive. By covering our hair we can keep from stimulating the lower nature of others who are not our spouses. It is up to each of us to maintain our purity and integrity.

Wrapping a turban everyday is our declaration that this head, this mind is dedicated to our Creator. The turban becomes a flag of our consciousness as well as our crown of spiritual royalty.

Wearing a turban over uncut hair is a technology of consciousness that can give you the experience of God. This experience is forall Khalsa, men and women both.

Turban in the Rehit (Code)

Amritdhari Sikhs (those who have been baptized in the Amrit ceremony) are supposed to have their heads covered when in public.

The turban tells others that we are different. By having a distinct appearance, Sikhs become accountable for their actions.

Our distinct Sikh appearance not only makes us think more often about our conduct and its reflection upon a wider society, it also makes us reflect upon our own ideals and how they reflect the teachings of the Siri Guru Granth Sahib.

The turban is there to remind us of our connection to God. It frames us as devotees of God and gives us a way to live in gratitude for this gift of recognition.

This responsibility of being recognized is also a way of keeping ourselves from self-destructive habits, such as smoking, drinking, etc.

The thing is, in our religion our identity goes hand in hand with the turban. There is no other religion in the world that wears turban as a daily Badge of Identity.

The uncut hair and the turban are a declaration to live in accordance with, and if necessary die in support of, the Teachings of the Sikh Gurus and the Siri Guru Granth Sahib.