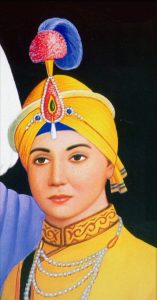 Since the death of Mata Jito Ji(1) on December 5, Zorawar’s grandmother, Mata Gujari, became especially attached to young Zorawar Singh and his infant brother, Fateh Singh. She took charge of both children as the column moved out of Anandpur.

While crossing the rivulet Sirsa on horseback, then in spate, the three were separated from Guru Gobind Singh. Their cook, Gangu, who had also succeeded in crossing the stream, escorted them to his own house in the village of Kheri, now known as Saheri, near Morinda in present day Ropar District.

While unsaddling the horse, Gangu saw that there were some valuables in the saddlebag. This tempted him to treachery. He not only stole the saddlebag during the night but also planned to betray the fugitives to the government in hope of a reward.

On the morning of December 21, 1704, the day of the fateful Battle of Chamkaur, Baba Zorawar Singh ji along with Baba Fateh Singh Ji and their grandmother, were taken into custody by Jani Khan and Mani Khan Ranghar, the officials at Morinda, after their cover was blown by Gangu who had reported them to the Mughal authorities.

They were dispatched on the following day to Sirhind, where they were consigned to the Cold Tower (Thanda Burj) of the fort. This spot is marked by the famous Gurdwara Fatehgarh Sahib.

On December 23, 1704, Baba Zorawar Singh Ji and Baba Fateh Singh Ji were produced before the faujdaar, Nawab Wazir Khan, who had just returned from Chamkaur with his feudal ally, Nawab Sher Muhammad Khan of Malerkotla.

Wazir Khan tried to lure the Sahibzade to embrace Islam with promises of riches and honors, but they spurned the suggestion. He then threatened them with death, but they remained undaunted. The death sentence of the two children was finally announced.

Upon Sher Muhammad Khan’s intercession for the innocent children’s lives to be spared, Zorawar and Fateh were given some more time to ponder over the suggestion to convert. Sahibzada Zorawar Singh Ji and his brother spent another two days during the severe winter in their old grandmother’s lap in the Cold Tower.

Atrocity by the Mughals

Still adamant, the young Sikhs were ordered to be sealed alive in a wall on December 25, 1704. According to tradition, as the masonry around their tender bodies reached chest high, it crumbled. The Sahibzade were sent to the Cold Tower again for the night.

The next day, December 26, 1704, after the alternative of conversion was turned down again, Baba Zorawar Singh Ji and Baba Fateh Singh Ji were martyred by being sealed alive in a wall.

The aged Mata Gujari Kaur Ji, who had all along been kept in the Cold Tower only a little distance away, breathed her last as the news reached her ears. Mata Gujari Kaur, through the upbringing of her grandsons, played an important role in Sikhism and as Sikhs, we owe our existence to her.

It was due to her teachings that the 7-year-old Zorawar Singh and 5-year-old Fateh Singh did not budge from their Dharma and attained martyrdom., thus continuing and emphasizing the Institute of martyrdom in Sikhism.

Seth Todar Mall, a wealthy merchant of Sirhind, performed the cremation of the three dead bodies the following day. The site of the fateful happenings, since christened as Fatehgarh Sahib, is close to the old town of Sirhind and is now marked by four Sikh shrines. A religious fair is held there from December 25 to 28 every year to honor the memory of the martyrs.

Death of Mata Jito in 1700 questioned

Following the link to Mata Jito Ji, one finds that “…consequent upon the evacuation of Anandpur on the night of 20 December 1704, Mata Sundari ji, along with Mata Sahib Devan (who adopted the name ‘Sahib Kaur’ after receiving Amrit), was escorted by Bhai Mani Singh Ji to Delhi.”

She lived for many years in Delhi after the death of her husband, Guru Gobind Singh Ji. The writer/s of this article has followed the same line of reasoning that earlier historians have followed — that at the time the young Sahibzade were escorted out of Anandpur by their grandmother, their mother had died earlier in the confused fighting that took place at Anandpur Sahib.