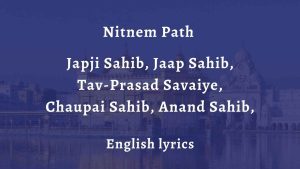 Jap Ji Sahib is a prayer at the beginning of the Sri Guru Granth Sahib, considered the holy scripture of Sikhs. It was composed by Guru Nanak Dev Ji, the first Guru in the line of ten Sikh Gurus. Jap Ji Sahib begins with Mool Mantra and is followed by 38 pauris (stanzas) and ends with a final Salok at the end of this composition.

Jap Ji Sahib  is believed to be the first composition of Guru Nanak and is now considered the comprehensive essence of Sikh faith. It is regarded amongst the most important Bani or ‘set of verses’ by the Sikhs, as it is the first Bani in Nitnem.

Jaap Sahib(or Japu Sahib) is the morning prayer of the Sikhs. The prayer was composed by the tenth Sikh Master, Guru Gobind Singh and is found at the start of the Sikh scripture Dasam Granth.

This Bani is an important Sikh prayer and is recited by the Panj Pyare while preparing Amrit on the occasion of Amrit Sanchar (initiation), a ceremony held to admit initiates into the Khalsa and it is a part of a Sikh’s Nitnem (daily mediations). The Jaap Sahib is reminiscent of Japji Sahib composed by Guru Nanak, and both praise God.

Tav-Prasad Savaiye  is a short composition of 10 stanzas which is part of daily liturgy among Sikhs (Nitnem). It was penned down by Guru Gobind Singh and is part of his composition Akal Ustat (The praise of God).

This is an important composition which is read during Amrit Sanchar. This Bani appears in the Dasam Granth on pages 13 to 15, starting from Stanza 21 of Akal Ustat.

Benti Chaupai (also referred to as Chaupai Sahib) is a hymn by Guru Gobind Singh. Chaupai is the 405th Charitar of the Charitropakhyan of the Dasam Granth and is a part of a Sikh’s Nitnem.

Chaupai Sahib begins after the 404 Chittar where two massive battles, including the later between Maha Kal and the devils, is narrated and the struggle of a goddess that was born as a result of the first battle and her quest for the acceptance of the Supreme Being, by her abandoning all other worldly desires, is illustrated.

Anand Sahib is a collection of hymns in Sikhism, written in the Ramkali Raag by Guru Amar Das, the third Guru of the Sikhs. It appears on the pages 917 to 922 in Guru Granth Sahib. The word Anand means complete happiness. The Anand Sahib is a part of the Nitnem (daily prayers) which are read by Amritdhari Sikhs before dawn.

Rehras Sahib commonly known as Sodar Rehras, is the daily evening prayer of the Sikhs and is part of Nitnem. It includes hymns from Guru Granth Sahib and Dasam Granth.

It contains hymns of So Dar, So Purakh, Chopai,Anand Sahiband Mundavani, among which Chaupai is from Dasam Granth. This Bani is a collection of hymns of five Sikh Gurus: Guru Nanak Dev, Guru Amar Das, Guru Ram Das, Guru Arjan Dev and Guru Gobind Singh.

Kirtan Sohila is a night prayer in Sikhism. Its name means ‘Song of Praise’. It is composed of five hymns or Shabad, the first three by Guru Nanak Dev, the fourth by Guru Ram Das and the fifth by Guru Arjan Dev.

This hymn is usually recited at the conclusion of evening ceremonies at the Gurdwara and also recited as part of Sikh funeral services. This hymn also recited before sleeping during bedtime.

The Ardas is a set prayer in Sikhism. It is a part of worship service in a Gurdwara, daily rituals such as the opening the Guru Granth Sahib for prakash or closing it for sukhasan in larger Gurdwaras, closing of congregational worship in smaller Gurdwaras, rites-of-passages such as with the naming of child or the cremation of a loved one, daily prayer by devout Sikhs and any significant Sikh ceremonies.An Ardas consists of three parts.

The first part recites the virtues of the ten Gurus of Sikhism from Guru Nanak to Guru Gobind Singh, starting with lines from Chandi di Varfrom the Dasam Granth.

The second part recites the trials and triumphs of the Khalsa and petition. The third salutes the divine name. The first and the third part are set and cannot be changed, while the second part may vary, be shortened and include a supplication such as seeking divine help or blessing in dealing with daily problems, but is usually in agreed form.

While it is sung, the audience or the Sikh devotee typically stands, with hands clasped in the folded namaste gesture, many with bowed headed, with some typically saying “Waheguru” after certain sections. Ardas is attributed to Guru Gobind Singh, the founder of the Khalsa and the 10th Guru of Sikhism.